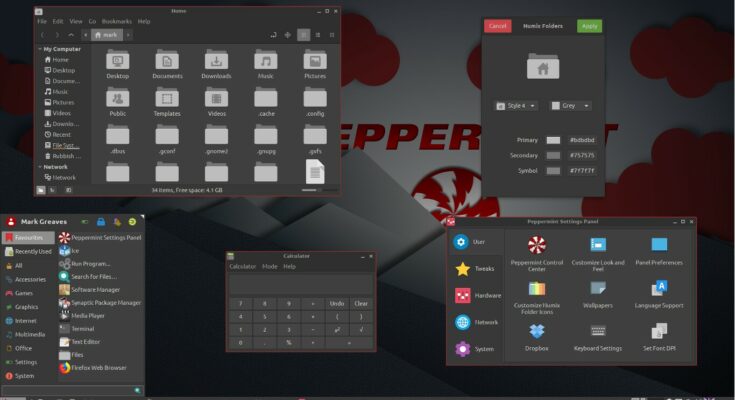 Peppermint 10 is the very freshly released operating system of Linux. This actually serves as the very new update to this lightweight distro.

The operation of this is very much dependent upon the present Long-Term Support release (LTS) of Ubuntu. It is also inclusive of Ubuntu 18.04LTS along with the Hardware-Enablement (HWE) stack.

A very amazing and I think the most important fact about the Peppermint Linux OS is that it claims itself to be a  “lightning fast, lightweight Linux based OS” that “provide[s] the tools to make the system your own”.

Features that make the Peppermint OS 10 stand out

The main thing that I must mention the feature of this OS is that it makes the use of the LXDE desktop environment but not in the old traditional form.

This is conjoined with the Xfwm4 window manager instead of Openbox. And, other than LXDE panel it is the XFCE panel with the Whisker menu plugin.

There are some other features that you must know about Linus OS Peppermint 10.

This operating system is extremely customizable. You can get the chance of creating your own preferred desktop layout.

So, now you know why this is something that triggers excitement in a tech lover.

How does it Work?

Peppermint OS 10 itself is based on Ubuntu Long Term Support (Ubuntu LTS) code. This signifies that it is stable and supported formally until 2003.

It crams the Linus Kernel 5.0 besides some really good nudges under the hood such as an advertisement blocker.

It also comes with ICE that is a utility that transforms a website or web application into an independent application based on a browser that actually combines right into the system menus and desktop.

This article here is actually something where I will be highlighting the knocking for the six performance this Peppermint Linux OS could set free to all users.

Perks of Using it

The devices like Asus VivoBook are developed in order to browse and light productivity laptops.

You will definitely not be playing games on those devices or executing any heavy workloads on them. But, they have a premium level storage in them as they come with 64 GB eMMC flash drive.

Here, the Linux Peppermint operating system 10 asked for about 8 GB unlike the Windows 10 that ate up 21 GB of the drive of a total of 64 GB.

Peppermint 10 OS is actually seeming to be just the right one as it is proving itself to be an expert in doing everything one would be able to do on a device running on Windows and much more given its lightweight system resources requirements.

The other thing that is exclusive about Linux Peppermint 10 operating system is that it actually uses one-third of the RAM of the system out of the gate.

This actually means that you can have a plenty of free space to get your important jobs done.

It also helps people to heap up too many works on the machine at the same time but it never makes the device go slow, hang, or suddenly stop working much unlike other similar similar devices functioning on other operating systems.

It Just doesn’t Get Tired

You can just do a ton of works on your Peppermint 10 device like open multiple tabs in your browser, play a video on youtube, play games, and do other stuff you feel like doing.

But, you will see that unlike many other devices running on any other operating system is not getting exhausted or slowing down in real.

None of the software you are using gets hanged or gets frozen.

I personally feel if you work with Peppermint Linux OS even for just a few hours, you will not only notice but you will also feel a great difference.

This is all I had to say about the latest Linux Operating System Peppermint 10. The only thing I can say about this is it is an amazing thing to use on your device.

It is just the beginning and already it has set fire among the technophilic community.

Let us know in the comment section provided below if you have used the very astounding Linux operating system Peppermint 10.

Your reviews on this will help us grow more and help you better with tech-related information.